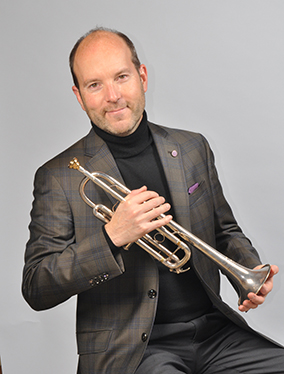 Christopher Woodruff joined the faculty at California Polytechnic State University in San Luis Obispo as Associate Director of Bands in the fall of 2006. In addition to his responsibilities with the concert and athletic bands, he teaches courses in music theory, and music appreciation. As Instructor of Trumpet he has also coached the Cal Poly Brass choir and teaches methods courses in brass pedagogy.

Woodruff received the bachelor's degree in music education at Louisiana State University and taught high school band for several years in Florida. He continued studies in conducting at Northwestern University, where he received the Eckstein Band Conducting Grant and completed the master of music. While in Chicago, he served as Music Director of the Spring Valley Concert Band and was a guest conductor for the Northshore Concert Band and the Northshore Chamber Orchestra.

Prior to his arrival on the Central Coast, he served as Director of Symphonic and Marching Bands at University of Northern Iowa and Director of Bands at Lycoming College in Pennsylvania. His guest conducting appearances have included concerts with the Penn Central Wind Band, Williamsport Symphony chamber players as well as the Northshore Concert Band and Northshore Chamber Orchestra, both in Chicago. As a trumpet player, he has played with the Baton Rouge Symphony, Billtown Brass Band, and Williamsport Symphony Orchestra. 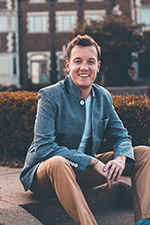 Nicholas P. Waldron is appointed Associate Director of Bands at Cal Poly, where he will oversee the Mustang Band and Wind Orchestra. He recently completed the Doctor of Musical Arts degree with honors in Wind Conducting at the University of Kansas School of Music where he studied with Dr. Paul W. Popiel. He served as a graduate teaching assistant in the Department of Bands, was the director of the Women’s Basketball Band and assistant director for the Men’s Basketball Band and taught conducting and music education courses. He holds a Master of Music Degree and a Bachelor of Music Education Degree from Indiana University, where he studied conducting with Stephen W. Pratt and bassoon with William Ludwig and Kathleen McLean.

Just prior to his time in Kansas, Dr. Waldron was an Associate Instructor in the Department of Bands/Wind Conducting at the Indiana University Jacobs School of Music. In this role, his responsibilities included teaching undergraduate conducting, directing athletic bands and guest conducting Indiana’s three concert bands.

A native of Hudson, Ohio, he served as director of bands for Sheridan Community Schools in Sheridan, Indiana.  His responsibilities included teaching several concert ensembles, music education courses, and marching and pep bands.  Under his direction, the SCS ensembles received consistent first place finishes and Caption Awards in Class A at State Fair Band Day and unanimous superior ratings at music festivals. Dr. Waldron’s professional memberships include CBDNA, Kappa Kappa Psi, the International Double Reed Society, and the Society for the Promotion and Research of Wind Music.

All prospective and current Cal Poly students interested in joining the Wind Ensemble or Wind Orchestra should fill out our Online Interest Form.

We enjoy meeting new students and encourage you to send an email if you have any questions or plan to visit campus. Contact information for directors and all band faculty and staff can be found on our contacts page.